From Skywanderers Wiki
(Redirected from Weapon)
Jump to: navigation, search

A variety of starship weapon systems are available in Skywanderers. They can be Integrated with player ships using blocks and bricks to create turrets or retractable mounting points. In the future, the player will also be able to construct handheld weapons using similar parts.

Recently, weapons have been getting added to the game in the new visual model, and with the base for legitimate gameplay elements. The first weapon to receive this treatment was the laser block, which was added in the Habitat Ring Update.

In the recent [weapons update 1], the block laser was given advanced stats and four attachments to equip it with. Later, the brick laser may gain these same attachments and similar attachments may be added to the other weapons when they are moved to the new model.

! These will all soon be transferred to the new visual model, but right now they're mega janky ! (so take all the info with two grains of salt)

They produce more heat than the Lasers[1] and are less effective when fired quickly. 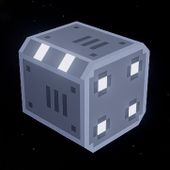 The rocket launcher is slightly larger than the Laser, at a 2x2x2 brick size

They can still be used in turrets, but will make them inherently larger

This Dual Missile Turret can dish out a lot of damage, but is relatively large

They serve little point in turrets, as they do not need to be aimed to be fired. 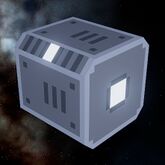 The Guided Missile Brick has the same dimensions as the Rocket Brick, but has one dot instead of four, possibly indicating a slower fire rate (not implemented)

The Guided Missile is most useful when on a fixed point on a ship - whether it be a deployable broadside array on a capitol ship, or a singular homing missile launcher on a fighter or bomber 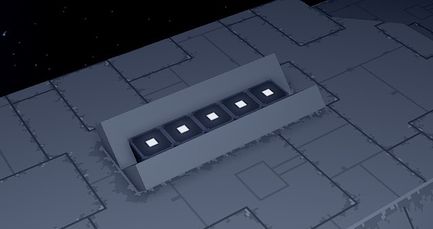 !! Currently Broken - Unable to lock and link to systems !!

They do not produce much heat[1] and can be fired in quick succession to increase your chance of hitting a target. 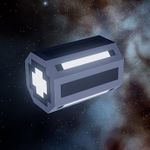 The Laser Brick is quite small, only taking up a 1x1x1.5 space

Due to their small size, Laser Bricks can be used in turrets of many different types - from point defense on capitol ships to small turrets on fighters and bombers 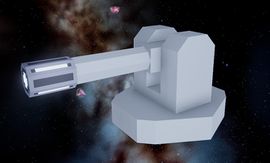 These new lasers can be scaled to a maximum of 4 blocks long, to increase damage. (may change in future) (also increases heat produced and energy consumed)

Since the brick laser has not been updated to the current weapon system, the differences are not yet known, although the specs are likely just a scaled version of the smaller one.

The laser block is just a big laser brick. The standard weapon found on ships across the galaxy.

These larger block weapons, due to their block size, are best used as larger capital ship weapons or spinal weapons for smaller ships. 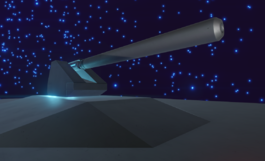 !!! In the current game state, this block does not exist, it may come back in a similar state to its departure, so I'm keeping this here !!!

The Beam is the big brother of the Laser, and as it's name suggests, it fires a high-power hit-scan laser that does impressive damage.

It produces a lot of heat, and draws the most power of any weapon.[1]

It takes time to charge up, and once activated, it will not turn off until it completely discharges.

They are useful in long-range capitol ship combat, and due to their size must either be fixed straight to the hull of a ship, or a large turret. 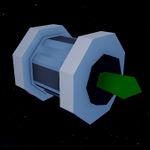 The Beam is the only weapon that is in the "Block" size category. It takes up a 1x1x1 cube.

You can also stack them to make a more powerful laser.[1] 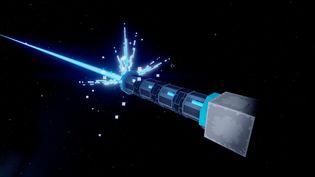 The Beam Unit is the little brother of the Beam Block, and by extension, the older twin of the laser. It fires a hit-scan laser of moderate damage.

It produces more heat than the laser, and also draws more power.[1]

Just like the Beam Block, it takes a little time to charge, and cannot be stopped when discharging.

They are useful in about the same ways as the Laser, as they do not take up as much space as the rocket launcher. Also, due to their hit-scan property, they wont hit the hull of your ship if you turn too fast. 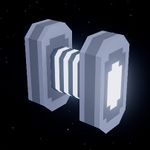 The Beam Unit is in-between the size of a laser and the rocket launchers, at 1x2x2

They, unlike the Beam Block, cannot be stacked.

This small PD turret is great for dealing with fast-moving ships
Retrieved from "https://skywanderers.gamepedia.com/index.php?title=Weapons&oldid=1079"