Skywanderers provides a vast procedurally generated galaxy for players to explore. It is very similar to real galaxies, with billions of stars, many of which have planets around them[1].

The skywanderers galaxy naturally contains stars, planets, asteroids, and nebulae. In the future, planets will likely gain satellites (moons). Galactic hazards (like black holes, space worms, and other sci-fi big bois) may be added to interstellar space, although it is unconfirmed whether or not you will be able to travel there.

Recently, the ring habitats have been re-added into the game. These rings were originally just used for testing planet tech, but it seems that now they're here to stay. They're similar to the halo rings from halo, and will likely act as basically a "space-city," or entire colony. 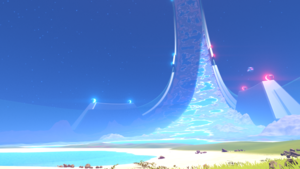 A picture from the surface of one of the early ring habitats. Plenty of water :) 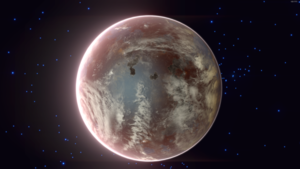 A picture from orbit around an earth-like planet. plenty of atmosphere

Currently you can travel anywhere in the galaxy with a ship of any size, as long as you have a hyper-drive. The amount of time hyperspace travel takes only depends on how long it takes your computer to load the target system. This will change in the future. 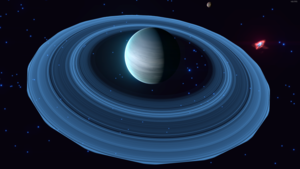 A picture from far in orbit around the OG blue gassey boi. plenty of asteroids (excuse the wobbly-ness of the ring)
Retrieved from "https://skywanderers.gamepedia.com/index.php?title=Galaxy&oldid=1111"
Category: